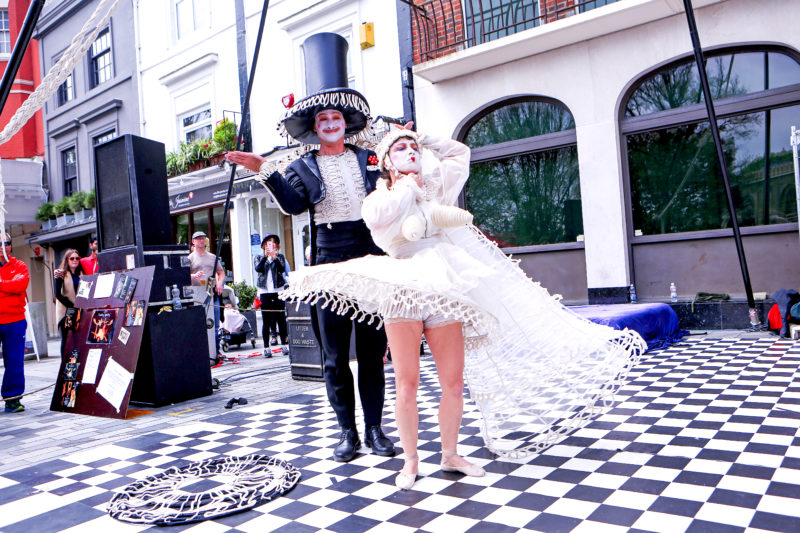 Ready for a little burlesque and foolish touch? Welcome to a wedding full of thrilling rush!

“Nuptial Ropes” is a modern circus performance, combining physical theater, high level acrobatics, mime and clown in a both sensitive and twirled universe…

A naive couple is preparing for the most important moment, his wedding. But the rush and destination involve them in a cluster of buffoonish events. Only her mischievousness and his strength bring them to a … happy end? 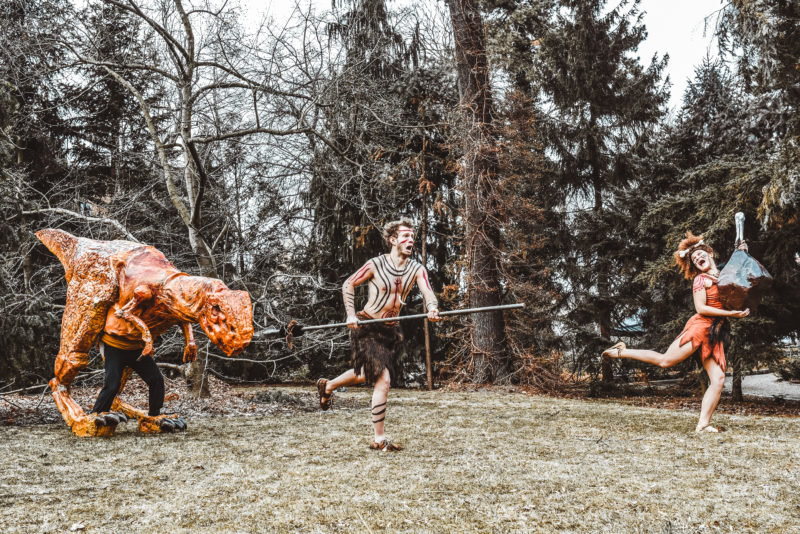 A journey in time? It’s possible!
We’ll take you back to prehistoric times! There, you will meet the Caveman, who will hunt down almost anything for his Woman, and a real Dinosaur who will hunt down almost everything that the Caveman has brought. Will the two protagonists manage to tame the beast and finally eat something? Just see it for yourself! 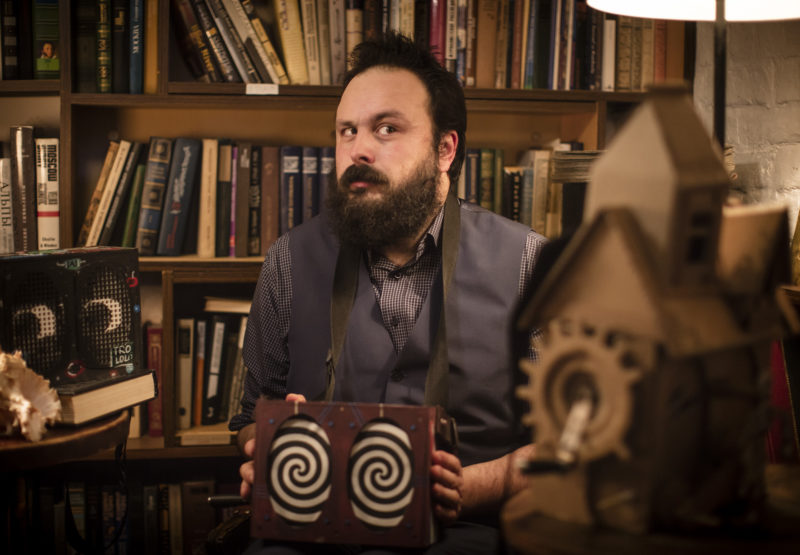 Alchemists from Cardboardia with Alchimical Music Box’s (www.ambox.me) will walking around and scan people for music that inside each of person and play it with machines.  Alchemists can be future talers as well. But most important that Alchemists searching for new gold of our generation – good mood and they try to convert everything to good mood!

Before performance Tyran of Cardboardia will organize training for Alchemists. So anyone who want to become new Alchemist and try to use Ambox can join our synchronical movements and communication workshop for couple of days and train and rehearse small walking acts. Lets try to know each other and result of our research we will show on festival! 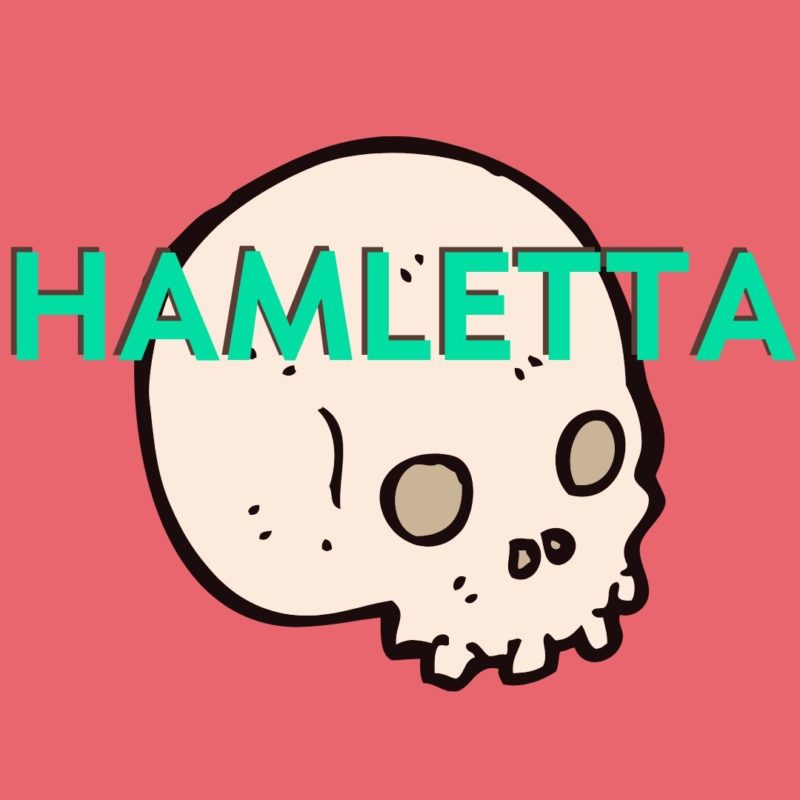 Hamletta just wants to go back to Oxford University to become a scientist. But when she meets the ghost of her father, everything gets all jangled out of sorts. This adaptation of Shakespeare’s tragedy was created by children from 8-15 as part of Wroclaw Shakespeare Club. Audiences of All-Ages are invited to decide the final action of Hamletta: will she get revenge or learn to forgive?

The Wroclaw Shakespeare Club is an after school drama group conducted in English. The year long project starts with drama games for children’s voices and bodies to grow to be more expressive. Then the group begins a process of adapting, improvising and building an ensemble. In the spring the children, along with their families, travel together to Stratford-upon-Avon, England. After visiting Shakespeare’s birthplace, the group returns in the spring and performs their final show as part of the Shakespeare in the Park festival.

A hedgehog who wasn’t afraid to dream, LALKA Theatre ON TOUR 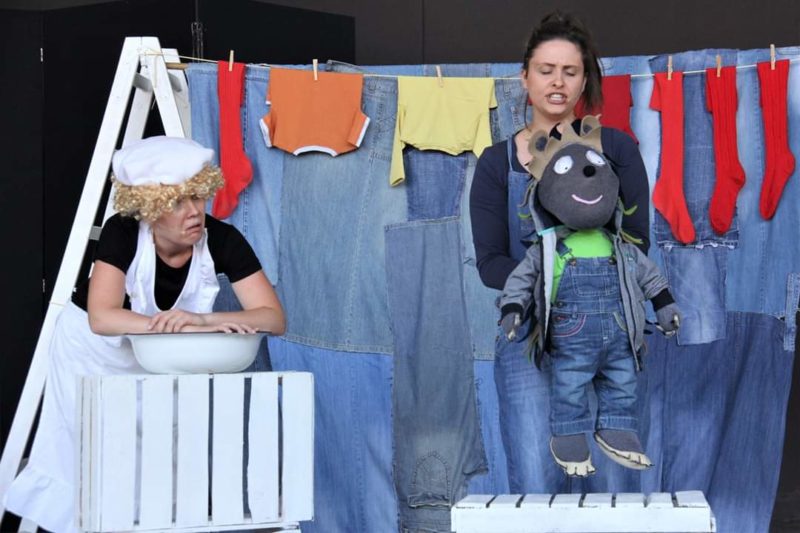 A story of a little hedgehog Tadziu, who really wanted to become… a poet. It’s hard to believe, isn’t it? Well – after all, everybody can dream! It turns out that his loved ones would gladly see him do something else. Tadziu has a feeling that nobody listens to him and does not ask about his needs, so he decides to leave the house alone. During his journey, he will meet many inhabitants of the forest, who will teach him a very valuable lesson. What kind of lesson? You can learn by watching the play. 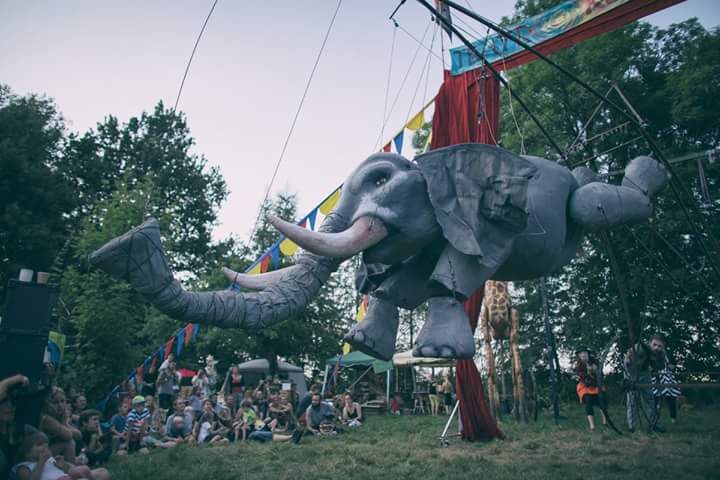 Circus TARABUMBA is one of the first of its kind in the world! Only here marionettes animated by puppeteers will perform on one stage with circus artists to create a beautiful, colorful performance. It is a tribute to theater, puppet and circus art.

The Dziecinada Festival and the theatre day in the open air will be concluded by the Grand Theatre Parade, prepared by children taking part in a three-day workshop with Cardboardia Street Theatre from Russia, the actors of the Puppet Clinic Theatre and the audience, who will take part in the workshop during the open-air activities. This thrilling day will turn you – even if for just a moment – into circus artists, clowns, mimes, puppeteers and musicians. The parade will be accompanied by the Wrocław-based band Sambacatum band. Don’t forget to don your most colourful and funny costumes! Be sure to join us there!

Shoshinz is one of the most renowned comedy acts in Japan, regularly performing in Tokyo, Canada, and the United States. “As clown ratings go,” wrote the Montreal Gazette, “the irresistible Yanomi is right up there with the best of the Cirque du Soleil pros.” “It’s not often you run across a show that is satisfying for adults, kids, performers and stoners of all ages,” wrote Victoria’s Monday Magazine, “but that’s exactly what you get with this charming and quite often hilarious fast- paced slice of Tokyo clowning.”

Theatre and pantomime workshops with the Puppet Clinic Theatre

The aim of the workshop is to teach not only pantomime techniques, but also body awareness in non-verbal interaction and ways of expressing one’s emotions with body and facial expressions. Additional activities will include stage movement workshops for youth and children, as well as getting used to performing on stage and free interpretation.

The workshops will be conducted by Krzysztof Roszko, an actor and mime, student of Henryk Tomaszewski with over 25 years of experience in the Henryk Tomaszewski Wrocław Mime Theatre, regular collaborator of the Puppet Clinic theatre and the Theatre of Arts. Teacher, stage movement consultant and choreographer. 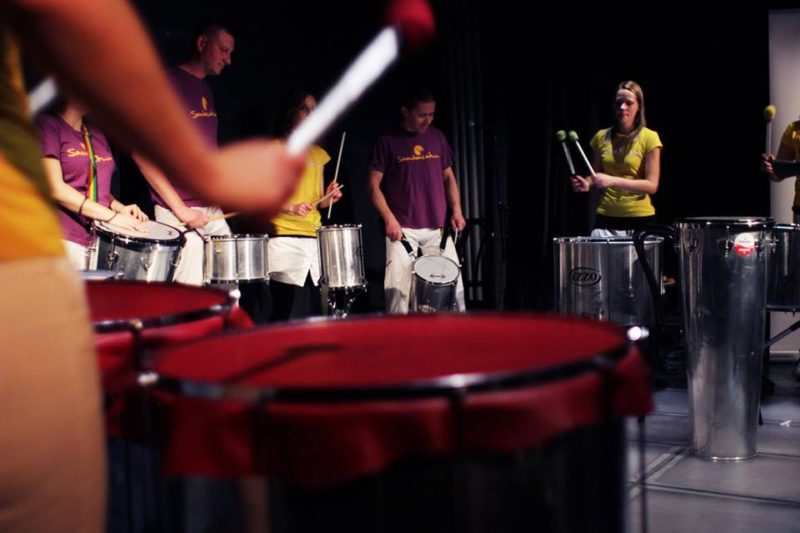 For children, contact with music and dance is not only great fun, but also an opportunity to spend the accumulated energy, develop their sense of rhythm, which promotes memory and learning, as well as integration by playing together. Sambacatum will host workshops for children and play for the audience during the Great Theatre Parade. 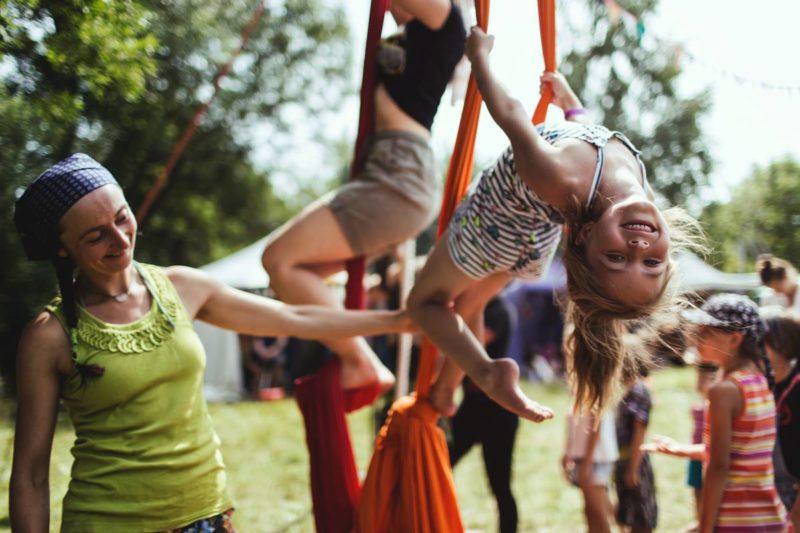 Circo matryoshka is involved in many social circus project in the world. She helped to build first children circus in Poland. Took part in social circus project for streets kids in Benin in Africa, she was working with children in favelas and small, poor villages in Brazil and taught circus to refugee children from Syria in Turkey.

As a circus teacher she can teach the base of every circus discipline: rope walking, stilts, ball walking, acrobatic, pyramids, juggling with balls, clubs and rings, hula-hoop, diabolo, flower stick, poi.

“Dziecinada” is the only International Festival of Children’s Theatre in Lower Silesia that is directed to children, their guardians, and whole families.